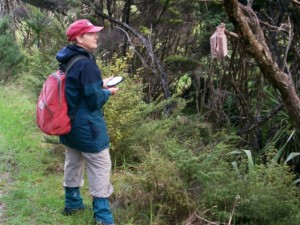 Having led Biology Departments both in New Zealand and Scottish Secondary Schools for many years I was delighted to receive a Royal Society Teacher Fellowship in 2005 and spend a year discovering the world of the song of the New Zealand bellbird (Anthornis melanura) with Professor Dianne Brunton’s research group at Massey University, Albany. Much of the year was spent on off-shore and mainland islands, finding and recording bellbird song and using playback experiments to both determine natural dispersal patterns of the birds and to investigate the behavioural responses of female bellbirds to their territorial neighbours and strangers.

After returning to the classroom refreshed, the lure of more research in 2011 allowed me to complete my Master’s degree in Microfluidics in the Chemistry Department, University of Auckland. Zebra fish was my target species this time, but research carried out in a windowless laboratory did not have the same appeal as a day recording bird song on an island. Happily, returning to Massey as a research technician in 2013 has allowed me to continue to enjoy my interest in this area. Being part of the Avian Acoustics Group, unravelling the complexities of bellbird song combines field work with office based computer analysis which is a perfect formula for me.